Skip to primary content
Breakaway transcends Americans passions for sports and casino gambling as it follows two professional hockey team owners who run the table from bankruptcy to a lucrative new arena and the most-storied trophy in all of sports. 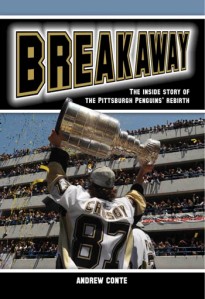 Already the Pittsburgh Penguins were unconventional. One former owner, a Hollywood producer, used the team as backdrop for a blockbuster movie with terrorists attacking during a championship game. Then after the Penguins won two real championships, its star forward Mario Lemieux took ownership of the team when it could not afford to pay the $32.5 million he was owed. Rather than skating off to a richer market, he stayed in Pittsburgh, a city going through its own transformation from gritty steel to clean, high-tech industries. To make payroll, Lemieux partnered with California billionaire Ron Burkle, a Page Six celebrity and pal of President Bill Clinton.None of that changed the fact that no one wins without cash. To make that money, a team needs a modern arena with luxury boxes, club seats and concession stands serving quality cuts of beef and micro-brewed beers. Defying conventional wisdom about sports and gambling, Lemieux rolled the dice on slot machines. When that idea became an uncertain prospect, Lemieux threatened to unload the team, nearly selling it to the Canadian business mogul who makes BlackBerry wireless devices. Finally, Lemieux forced politicians into doing what he wanted all along: They came up with money for an arena that would keep the team in Pittsburgh. In a meeting so secret that it took place in the back room of a New Jersey roadside hotel, Pennsylvania s Gov. Ed Rendell worked out a deal for using the state s slots proceeds to pay for the building. The moment brought together two old friends from Democratic circles: the governor and Burkle, a major party benefactor.
Then Lemieux and Burkle hit a hockey lottery jackpot, winning rights to draft the hottest phenomenon in a generation, Sidney Crosby, 17, who, like basketball s LeBron James, had been marked for greatness since grade school. The owners already had picked up another hot prospect: Evgeni Malkin, a Russian who played for the Steelers of the Ural Mountains, snuck away from his old team s owners in a late-night escape with the drama of a Cold War spy novel.
Breakaway brings the hockey fan into the action of the behind the scenes intrigue and high stakes action in the front office of a major league sports franchise.