I had a great talk with Brenda Waters and Jon Burnett on Pittsburgh Today Live. Jon played football at the University of Tennessee in the 1970s, and he brought a little of that personal experience to the discussion. You can see the full segment (and more of my red socks) here. 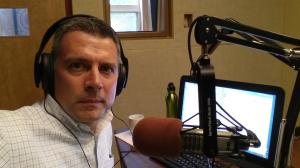 The station was gracious (daring?) enough to let me guest host again today. We had three terrific segments looking at…

— Whether it makes sense to move up Pennsylvania’s primary in presidential years. Charlie Gerow makes the strong case that the state should go for it — and take in the additional money and attention that would follow. Bill Green argues against. They actually get pretty hot at one point and I get to play traffic cop.

— Independent book stores fighting back. I talk with my new friend Susan Hans O’Connor, who has taken over the Penguin Bookshop in Sewickley. Susan has a rich history in the book industry and she’s doing a terrific job of making a strong case for the relevancy of small, independent booksellers.

— The Braddock High School football team of the 1950s. Spoiler alert: The team goes five years without a loss. It’s a pretty incredible story. And author Greg Nichols sets the team’s successes against the backdrop of what was then the largest strike in the steel industry’s history. The book is a fun read. And I got Greg to talk a little about how he recreates scenes that took place a half-century ago.

I hosted an event where my friend and former classmate Jennifer Steil talked about her work as a reporter in Yemen — and then how she used her real-life experiences as fodder for her latest fiction book, “The Ambassador’s Wife.” She’s really married to an ambassador, so there’s that.

I hosted Essential Pittsburgh, the daily current events talk show on WESA-FM, Pittsburgh’s NPR affiliate. I followed up on my story about women in STEM fields by interviewing the director of Carnegie Mellon University’s Girls of Steel Robotics Team. I talked with John Brewer about the work he’s doing to preserve images from the Pittsburgh Courier’s archives. And I pose a few challenges to Roberts Miles, who purports to be the concierge to the city of Pittsburgh (listen as the show nearly flies off the rails!).

I moderated a panel on “Violent Extremism in the United States” at the University of Pittsburgh’s Graduate School of Public and International Affairs. The school asked me to host the discussion based on my reporting about the Islamic State and other radical groups. 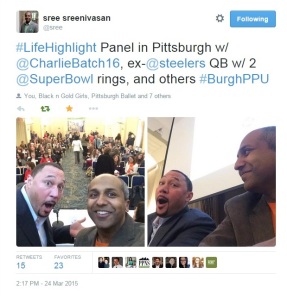 My latest appearance on WESA-FM, Pittsburgh’s NPR station, focused on my reporting from the U.S. Army War College and my latest investigation about the potential impacts of cyber warfare.

How devastating could a cyber 9/11 be? Tribune Review reporter Andrew Conte shares the results of his recent investigation into the vulnerability of the nation’s infrastructure to cyber attacks.

Andrew gives his thoughts on what the government and corporations can do to maintain security in the cyber world:

He continues by saying:

“Companies need to do some self-analysis. Start out there..do a search, figure out, ‘Is our industrial equipment connected and vulnerable?’”

Hosting Essential Pittsburgh on WESA-FM on November 24, 2014, I interviewed Tribune-Review reporter Chris Togneri about his latest story on gun victims who survive — and end up carrying a bullet with them for life.

Marcus & me after the show.

I also talked with Michael Mervosh, co-founder of the Hero’s Journey Foundation. And we talked with Leigh White and Louise Larkin about the Christmas Market in Market Square. Many thanks to producer Marcus Charleston for pulling it all together. 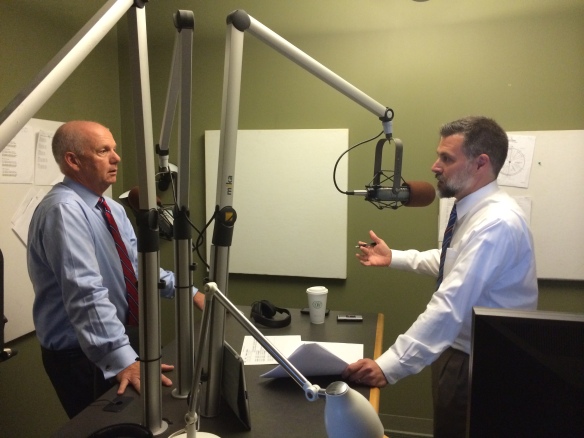 U.S. Attorney David Hickton, on left, stops by WESA’s Studio A to talk with me about Internet criminals.

Hosting Essential Pittsburgh, the daily news talk show on Pittsburgh’s NPR station, WESA-FM, on August 28, 2014. I interviewed U.S. Attorney David Hickton, led listeners on a tour of the Allegheny Observatory and chatted with Elaine Labalme about traveling through Europe with children.

Speaking with Paul Guggenheimer on Pittsburgh’s public radio station WESA-FM about the death of Bill Nunn Jr., Steelers scout and pioneering black journalist. “Nunn overcame numerous racial barriers during his lifetime. He opened sports reporting for African-Americans and helped turn the perennially awful Steelers into a dynasty during the 1970’s. Pittsburgh Tribune-Review reporter Andrew Conte, is writing a book about Nunn and wrote his obituary for the Trib.” 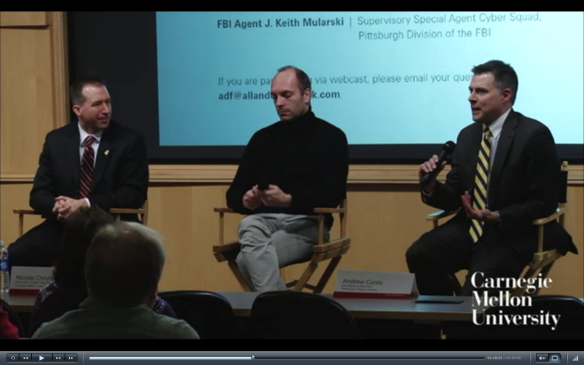 “The Future of Cyber Security and Global Journalism,” sponsored by the Overseas Press Club of America and the Ford Foundation. At Carnegie Mellon University on March 24, 2014. “Conte, who spent months investigating cybersecurity, told the crowd the Internet is a double-edged sword that threatens banks and energy grids, while allowing for the free flow of information that governments under siege would like to shut down.” — Pittsburgh Tribune-Review.

Accepting the Scripps Howard Foundation’s William Brewster Styles Award for “Shadow Economy” at the foundation’s 2013 awards show. JUDGES’ COMMENTS: “…This series employed deep and broad research to show the ease of hiding money in off-shore accounts, so easy in fact, your suburban next door neighbor could be harboring money from the government. In an innovative twist, for less than a thousand dollars these reporters set up their own shell company and bank account in Belize, a ‘tax haven.'”