Ruderman and Laker are getting a lot of national attention for their new book, Busted. But Point Park student Marina Weis found a unique angle: The reporters feel like they’re breaking into the “man’s game” of investigative reporting. 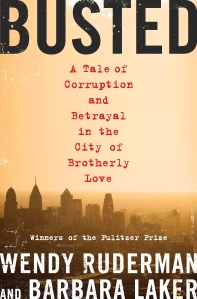 When a confidential informant for the Philadelphia police narcotics squad walked into the Philadelphia Daily News and asked to speak with reporter Wendy Ruderman, she and her colleague Barbara Laker had no idea they would uncover the biggest police corruption scandal in the city’s history.

The women worked with few resources at a newspaper facing bankruptcy. They knocked on drug dealers’ doors and chased down witnesses to get the story. Their tenacity and hard-hitting journalism in the 10-month series Tainted Justice won them the Pulitzer Prize in 2010. They became the first female investigative team to win the investigative reporting award.

“Suddenly we were like this hot ticket, and it came as a surprise,” Ruderman told the Point Park News Service. “It’s usually like a man’s game, and even then if a woman wins, it’s usually on a team.”

You can find the rest of the story here.

Maybe you’ve heard of ballhawks. These are guys (and they all seem to be guys, fully grown) who go to Major League Baseball games to collect as many baseballs as they can — home runs, fouls, tossups from friendly players.

Point Park student Alex Stumpf profiles ballhawks this week. And in the process, he uncovers a gripe from one who used to clean up at a nearly empty PNC Park. The Pirates have become too popular, he says. Check it out — along with the great photos by student Matt Nemeth — and see if you agree.

Either way, two weeks to Opening Day on the North Shore.

Ian Weir does not remember when he went to his first baseball game, but he remembers what he brought.

“I’ve taken my glove to every baseball game I’ve ever been to,” Weir, 20, of Oakmont, said.

Weir used his glove to snag nearly 200 balls last year and is a part of a distinct demographic of fans known as “ballhawks.”

A ballhawk refers to a fan that is able to collect multiple baseballs a game. They say they do this for a variety of reasons, from being able to tour stadiums around the country, to meeting fellow ballhawks nationwide and to boosting their memorabilia collections. The subject has spawned multiple blogs, a book and even a documentary narrated by Bill Murray.

Read the rest of the story here.

Companies understand the delicate balance between collecting detailed information on shoppers — and revealing how much they know or what they do with it. Jon Iwata, an IBM vice president, talks about it as the continuum between privacy and convenience, similar to the government one between security and civil liberty. To understand companies’ reticence, note that few responded to my request for information…

The Trib’s great Andy Russell took this photo of Erin Price. Funny back story: He set up the photo because it looks great — and only realized after talking with Erin how steps play into her exercise routine. That coincidence makes for a great illustration.

Giant Eagle won’t say much about the information it collects on people who enroll in its rewards program to earn savings on food and fuel, but it knows who has a weakness for Goldfish crackers.

GNC can see when your New Year’s resolution ended. And Dick’s Sporting Goods has a pretty good idea who will return to its stores this spring to gear up for baseball or softball season.

Consumers willingly — if unwittingly — provide trillions of “data points” to companies about their purchases, intimate habits and even where a computer mouse hovers on a computer screen without clicking. Americans worried about government spying often have themselves to blame when it comes to private-sector monitoring, experts said.

Read more about this story. Check out our entire Cyber Rattling series here.